What is Climate change?

Climate Change is the biggest single issue facing humanity right now. Our world is far from perfect, but all of the other problems we have - war, poverty, inequality, disease - though huge problems, all pale in comparison.

Climate change is a broad catch-all term for all of the changes that humanity has made or caused to the world. There are many aspects, from the extinction of many animal and plant species to plastic pollution, but the most concerning is the emission of greenhouse gases. Simply put, these are gases that, when released into the atmosphere, act like a greenhouse - they trap heat that would normally escape into space, and bounce it back to Earth, warming the planet. There are a number of gases that have this effect, but the one we produce the most of is carbon dioxide - CO2 - which is why this is the best known.

But so what? Surely humanity can't be causing that much effect? The evidence is beyond refute - we have disrupted the fine balance of our planet, and even if we only warm it one or two degrees, the effects would be drastic. Weather becomes more extreme, droughts become much more severe, heatwaves become commonplace. Our icecaps start melting, which raises sea levels, flooding coastal cities. Low-lying regions and countries may disappear entirely. Many regions near the equator will turn to desert and become unliveable, which combined with coastal flooding will cause mass migration on a scale never seen before in human history. War becomes more likely as countries fight over the dwindling resources. If it sounds like an apocalypse movie, well, that's because it is an apocalypse.

Where are we right now?

Right now, global CO2 levels are at around 410ppm - a seemingly arbitrary number, but pre-industrialisation CO2 levels were around 280ppm - we've added over 1/3 into the atmosphere in around 150 years, and are adding more at around 2ppm per year on average. This has led to a temperature rise of around 1°C globally, although some places have seen temperatures increase much more. The effects are starting to be felt already, with more extreme weather - wildfires, heatwaves, droughts and more - all happening with increasing regularity. The UN have reported that we're seeing one climate-related calamity every week currently, and that's only going to get worse. That's not including the direct effects of air pollution on us, which causes an estimated 4.2 million premature deaths per year, the effects of which fall heaviest on minorities and the poorest.

So where's all this CO2 coming from? Ultimately, it comes from the processes that power our daily lives, from the vehicles we drive to the energy we use. Virtually all transport (cars, vans, trucks, planes, ships and more) all burn fossil fuels to move, so everything from travelling to work to delivering our Amazon packages emits CO2. The vast majority of power is produced through burning fossil fuels, usually coal, gas or diesel, so even electricity isn't emission free. Heating our homes and businesses also produces carbon, as do many industrial processes. We've built our modern economy on a backbone of fossil fuels, and unfortunately it's destroying our planet.

In 2015, world leaders gathered in Paris to agree what to do about Climate Change. The conclusion, based upon the latest scientific evidence, was that a 2°C above pre-industrial temperatures was the maximum warming we could endure, and 1.5°C would be vastly preferable (although much harder to achieve). The signatories to the agreement (that became known as the Paris Agreement) agreed to aim to keep global temperatures below this level at all costs. It's hard to be certain about what is the maximum level of CO2 in the atmosphere we can safely reach to stay below 2°C - it depends on how slowly we climb to that maximum, whether we stay there or reduce emissions after, how the planet reacts... but most models give a 50% chance of not exceeding 2°C at 450ppm of CO2. At current levels of emissions, we will hit that in around 10-12 years. We have very little time to act, and a huge amount of work to do. The longer we leave it, the harder it will become, and the worse the consequences will be.

What can we do? 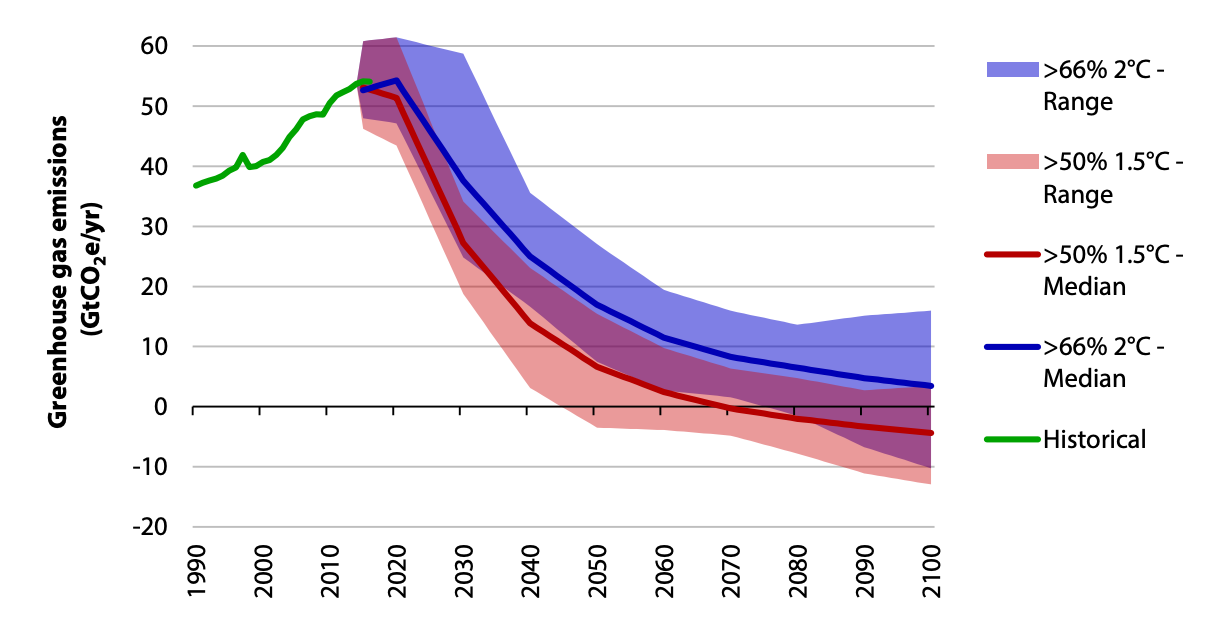 Ultimately, we need to stop emitting CO2 as soon as possible. Countries are finally starting to put in policies and legal commitments to zero emissions, and in the world of business, changes are starting to take place from transport to clean energy. However, we're still not moving fast enough. The effort required to prevent climate catastrophe has been compared to the mobilisation of countries in World War II - most of the world's major countries focusing their entire economies upon a single goal.

As individuals we are far from powerless, however. There are a lot of changes we can make on an individual basis, from reducing flying to insulating our homes, all of which will move the needle a little. We can use our consumer spending behaviour to influence business decisions - if we boycott businesses that emit heavily, that creates a market incentive to clean up. We can also lobby government, whether that's writing to our politicians or taking to the streets and marching to make our voice heard. Government moves slowly, but if they believe the people want change, they will act. Last, but by no means least, we can build and support new technology to replace the most intensive sources of emissions.

This is far from a complete list of the ways we can act. If you'd like to find more information, or guides on what you can do, I'd recommend checking out the resources page. Alternatively, if you want to find out more about the big solutions to Climate Change, and the companies and projects working on those approaches, take a look at the solutions page.